FREE UK Shipping On All Orders! 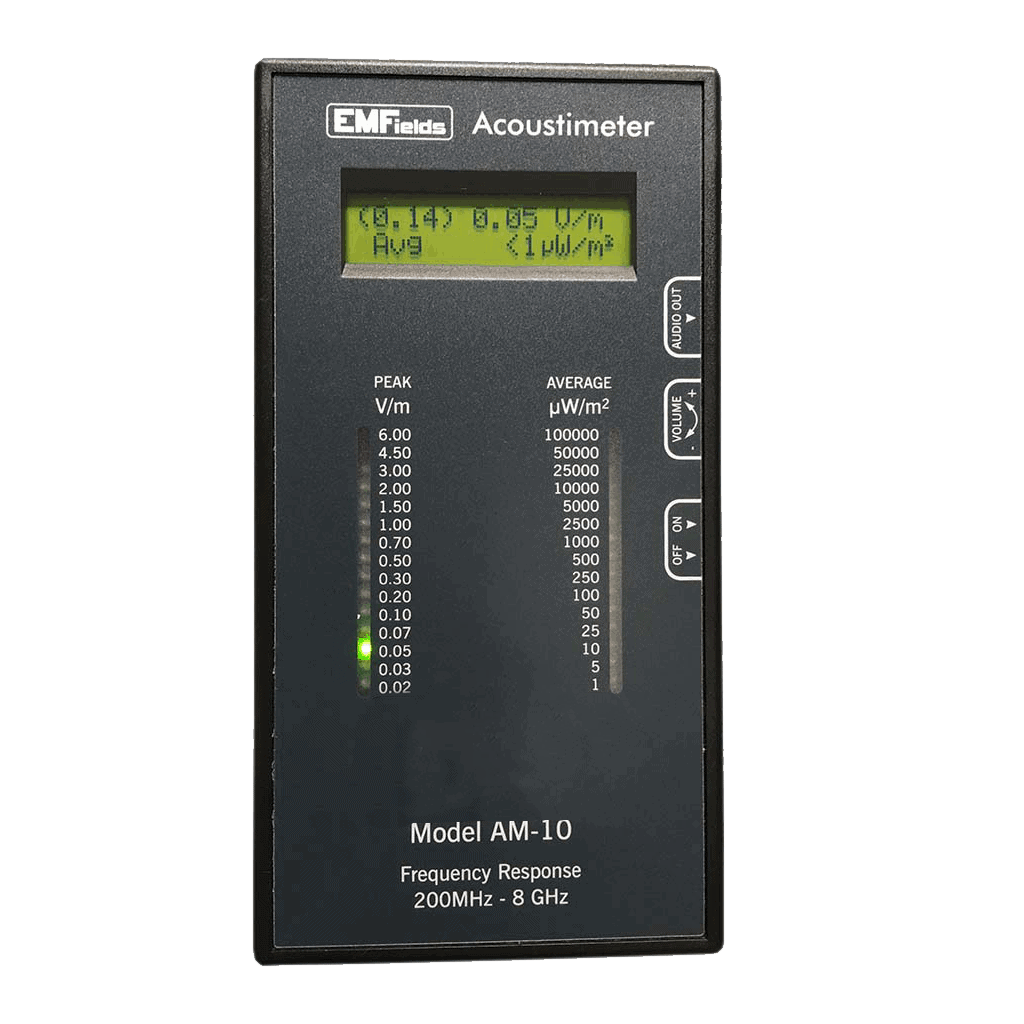 Easy to use and incredibly powerful, EMFields’ Acoustimeter is an extraordinary microwave detector. Boasting a very fast response, it can detect over 8 GHz and has the ability to react to very short pulses. An emf meter unlike any other on the market, its sleek design includes a good size LCD screen and bright LEDs.

How does it work?

The Acoutstimeter has a simple design with an on/off button. Once it’s switched on, it will show the readings (whether they are audible or visual) on the LCD screen. The internal state-of-the-art antenna is located at the top of the device, allowing for a more accurate reading.

The signals themselves will primarily be measured when the device is situated behind the instrument, but it also has the capacity to measure sources when they are located to the side. If the source is placed in front of the emf meter, the LCD will perform like an RF screen.

How is the sensitivity displayed?

How is the pulsing signal heard?

It can be heard through the internal speaker.

What frequencies does the Acoustimeter cover?

The emf device displays the peak levels of microwave electromagnetic fields from 200 MHz up to over 8000 MHz (8 GHz).

Does This Measure Magnetic Fields?

No, if you require a magnetic field measuring device check out the PF5 also by EMFields

Is the carrier bag included?

Yes, the Acoustimeter is shipped with its own protective carry bag.

Does it come with a warranty?

Yes, the Acoustimeter comes with a 2-year warranty

Can I return it?

To offer our customers the most efficient service, we offer a ‘No Quibble’ returns policy that allows you to return the emf meter within 30 days of purchasing it. To find out more about our return policy, contact us today.

Do you offer support?

Our customer’s purchasing experience means a lot to us. So we provide free technical advice and support to ensure that they are fully satisfied with the product. Our experienced emf shielding experts have years of experience working within the field and can answer any queries that you have regarding the EMFields Acoustmeter.

How big is the Acoustimeter?

What power source does it require?

We aim to reply to all messages within minutes where possible

We've operated in the field since 2004, and we know what we're talking about

We offer simple 'no-quibble' returns on our products

We are always available to answer your questions, no matter how big or small

We aim to ship all orders within three working days

Our research and development team are constantly creating new products

Presenting radio frequency (RF) measurements as an audio signal, it will measure both peak and average readings at the same time. Covering all frequencies from TETRA to WiMax and WIFI, it’s sensitivity make it the ideal choice for those who suffer from electrosensitivity. Accurately measuring radiation levels from 200 MHz to 8000 MHz, this broadband instrument has been designed taking into account previous microwave and RF measurements.

Expertly designed so that you can see the levels of microwave signals, you will be able to determine the safety of the environment around you. No matter what the level of microwave radiation, the Acoustimeter will pick it up – whether it’s below 0.02 V/m or it seems as though there is no modulated radiation. Covering the frequencies produced by most communication systems, it’s a piece of kit that you won’t want to miss out on.

When it detects RF or microwave radiation, the readings will show on the LCD screen and will light the LEDs up. Updating according to the levels in the room, the emf meter will allow you to see the different hot spots in the area. Giving you time to note down the readings, the display makes the meter user-friendly – so you don’t have to be an expert to use it.

For extra convenience, it also has a speaker alongside an audio output socket that you can insert headphones in, which will give you an idea as to which devices are giving out the microwave radiation. After some practice, you will become more familiar as to which devices have a higher reading than others – however, it’s important to remember that if there are several devices that give off RF, the sound might be harder to identify.

What are peak readings?

The peak readings are what they say on the tin – they are the highest possible reading. Accurately and efficiently reacting to shorter pulses that are frequently transmitting (e.g from WiFi), the emf meter is ideal for those in any industry. It’s important to know, however, that the meter won’t react to every pulse – in particular, those that emit for under 5 microseconds.

The peak-hold reading can be seen on the LCD screen. This can be higher for particular sources, but because the peak LED display doesn’t show all pulses, it can be difficult to detect. If you want to try and detect the peak-hold, you can simply turn the device on and off again and the previous reading will clear.

What are average readings?

The average reading will calculate the average amount of RF levels by updating 4 times each second. Giving you a more accurate result, it will consider RF levels that are far lower than other sources (I.e WiFI and DECT – which has an average power of 0.01). Translating the highest peak reading into true average power, you will be able to measure the levels far more efficiently than when you use an outdated emf meter.

GET 5% OFF YOUR ORDER